A perfect dichotomy of colour and torment, Filipino artist Yeo Kaa (b. 1989) paints deceptively candy-coloured characters stuck in violent states of reality. Her stylised figuration brings to mind animation and fictional characters from children’s books, a fantasy world that exists only in dreams and imagination. Yet these elements cleverly camouflage haunting and daring images: a tableau reminiscent of a crime scene, decapitated and dismembered bodies, or an insane person out of a killing spree. Such provocative combination of contrasting temperaments may well refer to a world full of contradictions, a world where darker tendencies of human nature are masked by misleading façades and are lurking beneath pleasant veneers.

Yeo Kaa studied Advertising at the College of the Holy Spirit Manila, and has won the University of Santo Tomas On-the-Spot Painting Competition and Special Prize of the Metrobank Art and Design Excellence in 2010. She has mounted ten solo shows to date in Singapore, Philippines, Indonesia and Germany. In 2017, she was an artist-in-residence at Sarang Art Space in Jogjakarta, Indonesia and Arteles Creative Center in Haukijärvi, Finland and in 2018 completed a residency in Berlin. 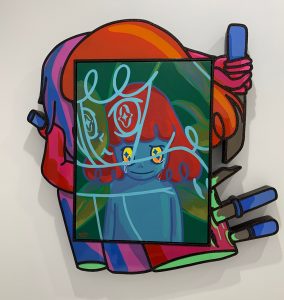