After working on illustrations using digital software such as Photoshop, he also started painting with oil paintings. He is still active in digital and analog.

Using the two-dimensional expression, the screen is composed by the Japanese character modeling that the author has been familiar with and the creation of a quiet and two-dimensional space influenced by Nicolas de Staël.

With the theme of a world view that evokes nostalgia, while incorporating the design and taste of old things that are no longer used, the child’s gaze looking in loneliness evokes the old memories of each viewer and at the same time creates an opportunity to look at the present. 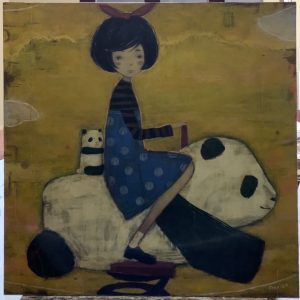