Fajar has graduated from art institute, Institut Seni Indonesia Yogyakarta and continues his career as an artist in Yogyakarta.

He has two tendencies in his work, first he uses the “What If Multiverse exist?” pattern to see exixting perspectives as new possibilities. And another tendency in his work to use iconic robot figure in each of his work, these figure are deformation of Dwarapala form as a form of his local culture. »Dwarapala is a statue of a gate or door guard in the teachings of Shiva and Buddha, in the form of a human or a monster. Usually the dwarapala is placed outside a temple, shrine or other building to protect a sacred place or sacred place inside »

For now he is deeply intrigured by Sci-fi reality after apocalypse and relates it to our empirical experiences in popular culture. The pop culture style that accompanies his work for now is taken from adapting and appropriate the cyberpunk genre of comics or cartoons. 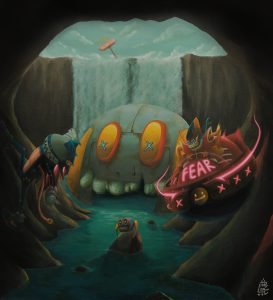