Debbie Reda was born in Buenos Aires, Argentina in 1976. She studied Producction and Fashion Design at the University of Buenos Aires, Marketing at the University of Palermo and Curatorship and Cultural Management at the Eseade University of Buenos Aires. She studied Illustration with renowned Argentine and Colombian illustrators and took classes with Argntine masters in both painting and drawing. She participated in international artistic residencies and art fairs. Her work belongs to collections in various countries such as Argentina, England, China, the UK, the United States and Australia and Spain.Her work cites the games, toys, playground and memories of her childhood. Taking a record of the influence of Art Brut, the phenomenon of repetition is  constant in her work. Her Monster Collection is her most figurative series, where abstraction comes to life becoming characters that reflect with humor and irony, different moods and circumstances of everyday life.I can say that I am a self-taught artist, because I have not been academically trained in Fine Arts. Although I studied Illustration with renowned Argentine and Colombian illustrators, I have atended to masterclases with rename argentine masters in both painting and drawing.

To break with the rigidity of illustration and figuration, around 2015 I began to make a work more linked to movement and the phenomenon of repetition. Having done also profesional Ballet for more than 12 years, it gave me the knowledge of the beat, the music, the rhythm, the choreographed movement, all tools that I used in a more performative work. In 2017, the Swab art fair in Barcelona invited me to make an on-site mural of more than 4 meters. And since there I began to combine these live actions with works that reflected the repetition of the movement. I found in that abstraction, in that repetitive gestures, the identification with certain moments of my childhood, almost in a silence of Zen meditation, the blows of the media on the paper transported me to the hours I spent drawing as a child. Hence the influence of Art Brut in my current work. Where somehow that abstraction came to life until it became a character, but still retains that essence of repetition, overlap and movement. 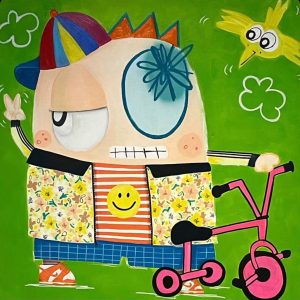 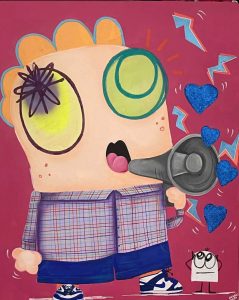 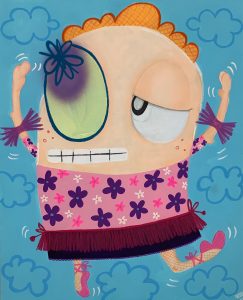